In recent years, Study in France has been on the list of most desired study abroad destinations for many. The active efforts from the French government and institutions alike have made France one of the most preferred countries for international students. More than 25 universities in France are listed in the QS World Rankings as of 2022. Before we move on to education in France, here are some things you should know about the country: 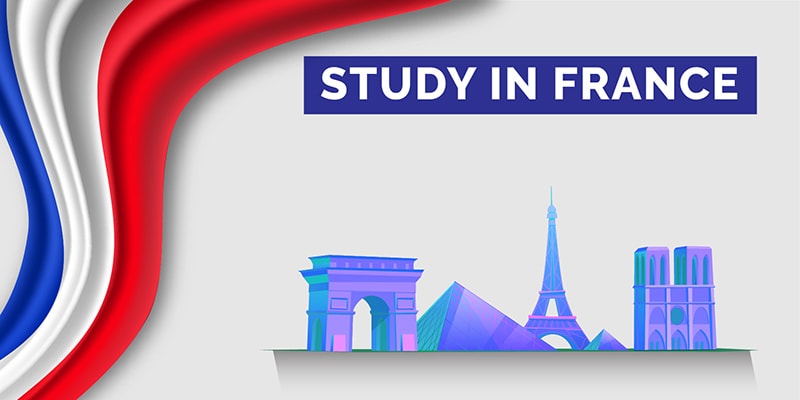 France, which has existed in its present shape since the fifteenth century, is Europe's most seasoned and one of the biggest countries. It is a pioneer in scholarly patterns, expressive arts, design, and food. France is likewise the world's fourth-wealthiest nation and Europe's leading rural maker.

As we have mentioned, France has been one of the most preferred countries to study abroad in recent years. The main reason for that is the top-ranked universities in France. The universities and specialized Grande Ecoles are some of the best higher educational institutions in Europe and the world. Additionally, the courses are offered in the English Language for international students. Basically, it means that one does not have to know French in order to study in France. More on that here:

Study in France in English:

For international students, almost all the renowned courses in higher education (both bachelor's and master's) are offered in English. The assignments and exams are also in English, and so is the teaching. The students, however, should learn basic French if they want to work and study in France, and their language might be a barrier.

In normal day-to-day life, one can easily go along not knowing French as there are a large number of English speakers in the country. Students who have been studying in France, or have been to France have experienced no problems studying and staying in France without being fluent in French. Along with the Netherlands and Germany, France has some of the most numbers of English-taught courses in Europe.

Though the requirements to study in France will change with the courses and universities you choose, there are some basic requirements to be fulfilled. The student should apply to and have an acceptance letter from the universities in France. There are some language requirements (for both French and English courses) to be fulfilled, also. One also needs to have sufficient funds to sustain themselves in France for the duration of the course. Health Insurance and Long Stay Student Visa are a must for students applying for a long-term course.

As we said, the courses and universities will have their own requirements or exceptions in their requirements. It is best for the students to check the specific course requirements with the university before applying. For instance, there are some universities in France that let you study in France without IELTS. Here is all you need to know:

Study in France Without IELTS:

IELTS is one of the essential requirements all around the world for English-taught courses and universities. It is an assessment of the student’s language abilities to see if they will be able to understand the teachings and assignments. If a student has not appeared for IELTS, he or she can still apply to the list of universities below and get accepted. In lieu of that, students might have to prove that they have previously studied in an institute where the medium of instruction was English or appear for a video interview with the university officials. Some of the universities where you can study in France without IELTS is:

France is one of the most affordable English-taught destinations not only in Europe but in the world. For years, France has been an affordable yet prestigious destination in the world. Not just the tuition fees, accommodation, transportation, and other living costs are also affordable for the students. All the courses mentioned above will depend on the course, university, and the location you decide to study in France. You can check the university tuition fees for a specific intake on their course pages. For all the other costs, the monthly costs can be anywhere around 650-1000 euros a month. A lot of these costs also depend on the lifestyle of the student.

Scholarships to Study in France

Work and Study in France

International students are allowed to work part-time jobs in France. However, the nature and timing of the work should not interfere with their studies. The restriction on the time is 20 hours per week, which means a student can work for 20 hours a week at part-time jobs and earn money to help themselves with some day-to-day costs. During semester breaks and holidays, they are allowed to work full time. Many students use this opportunity to gain real-world experience and for networking which helps them later while actually looking for a job after graduation.

Stay Updated with Join In Campus

You have been successfully registered for our Newsletters
shape 3